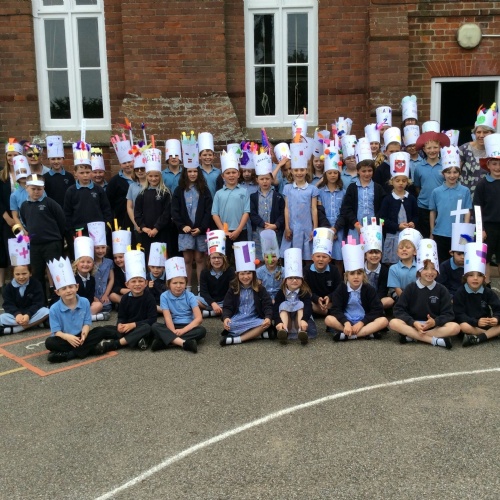 This year's theme was 'All about Nothing' or zero in mathematical terms.

We began with some whole school activities: a quiz with a whole mix of challenging maths questions like "What is a three sided shape called?" "How many minutes in an hour and a half?" and "What is 5 squared add 3 squared?". Two teams got full marks, so it had to go to a tie breaker: How many times are cats mentioned in the bible?  Zero of course - we're leaning about nothing today after all!

In classrooms, we then had some time to make our own maths hats to wear all day - they were all very colourful and creative and had some great mathematical images and symbols on them - can you see yours in the whole school picture, or in the album below?

After play, it was time for us to learn about zero!

Class 1 looked for zero around the room and studied some pictures of objects where there was 0 left - empty plates, empty car parks, stalks with no cherries etc. before creating their own very colourful 0s to be made into bunting. Some of the year 2s also had a go at seeing what calculations they could make that would result in 0. Their answers are on the maths day display in school.

Class 2 began learning about 0 in negative numbers, large numbers AND how to calculate with it. Do you know how many zeros are in a thousand? a million?? a billion??? You'll have to ask years 3 and 4!!

Class 3 learnt all about the history of zero. They learnt about the Romans, Egyptians and Babylonians - all three ancient civilizations had number systems which were very complex, and it was actually a Hindu mathematician in India who first decided to use a . in place of a number that was not there any more, which eventually became the circular zero we use today. Did you know that the word 'zero' was first used in 1604?

In the afternoon, we were lucky enough to have a lot of parents join us (thank you to those who came!) and take part in three really exciting mathematical activities:

With Miss Briley, we measured trees by looking through our legs (using angles and Pythagoras' theorem), estimating with our fingers and comparing the heights of children with trees.

With Mrs Lever, we took part in a maths obstacle course, where we had to do lots of activities like adding scores in hoops; kicking balls with accuracy for different points; throwing a ball whilst counting in twos (but you had to say FROG instead of 4!); and moving along a bench answering different maths puzzles.

In the hall after school was a maths café, where parents (and children) could see how the learning of addition develops from year 1 to year 6 and how it becomes more challenging. Again, thank you to all the parents who took time out to come up and take a look!

Please see below all the photos from today - there were just too many to choose from for this blog!!